Julie Schlenker died yesterday of a brain tumor.  She was a horse friend from Alba, MO, who used to live on a dairy farm outside of Ankeny, IA.  Cousin Steve bought his first stallion, Tali Islam, from Julie back when he first got into horses.  (Tali became his trail riding buddy.)  So many people and memories connect to Julie.

Faye and George Bryan, who back then had a 3,000 acre ranch outside Wall, SD, used to be the preferred overnight on our yearly trips to take herd sire ROL Raven home to Steve in August.  (Steve and I bought him in partnership and toted him from WY to IA every May, and back every August.  He thus was always up for a trailer ride, as that meant MARES at the end of the trail.)
*

Along the way, Julie and I always rode as much as possible — in the Grand Tetons, the Rockies, the Badlands, etc. every year, spending at least a week in the mountains.   Julie and I once took a mare back to New Jersey, riding daily along the Ohio River in forest preserves and national parks.  One rainy night, a park official was uneasy letting two lone women camp on top of Old Baldy.  It was late, and we had yet to set up camp and make dinner.  Exasperated, Julie, who was driving, leaned over, opened the glove compartment, rustled around in the dark a bit, then pulled out a pistol.  I'd traveled with her for years, but did not know we were armed (and presumably dangerous.)  The park official backed off and allowed that maybe we could take care of ourselves.  I can still picture wading the horses along the rock bottom under clear creek water as they drank the  following sunlit morning in a lovely meadow where we finally made camp. The view was stupendous, the air bracing, and the neighbors nonexistent.  It could have been pristine wilderness for all the encroachment civilization had managed.  Joyous times. 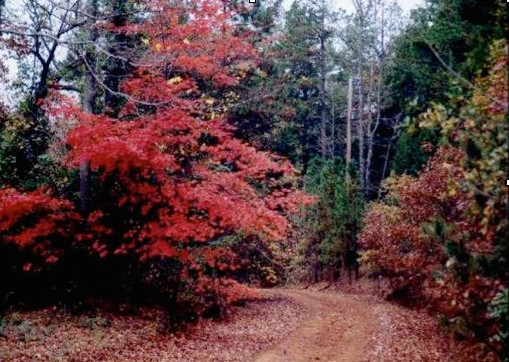 Julie had planned to go riding this summer, as well, but not in the west, choosing instead somewhere closer to home.

Originally, Julie was a PE teacher, long and lean, who helped her parents operate a dairy herd.  Eventually, she moved the operation to southern Missouri, then sold off the cows, keeping enough land for her horses.

Over the years, we toured a wild horse ranch in Wyoming one year, taking a ton of photos; another stop was a buffalo ranch (my Irish Setter, bird in her nose, ran three miles.  There we were, mini "whinny" Julie's toy poodle, and loaded four horse, trying to track her down...) 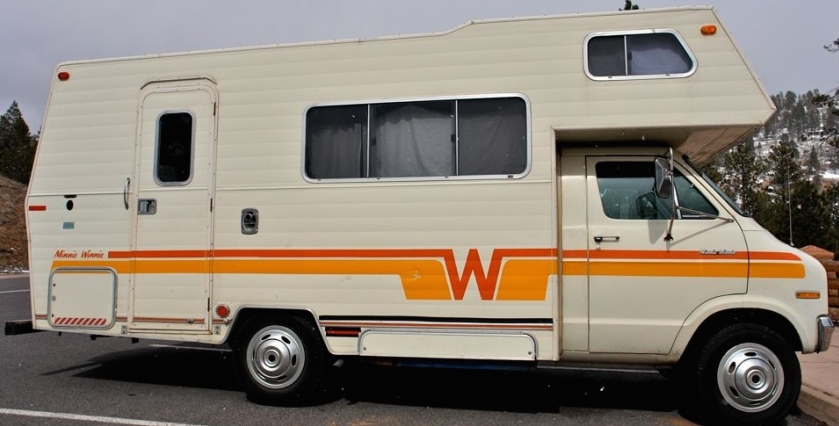 We used to ride into the Popo Agie River/Sinks Canyon area of Wyoming.  Once Steve, his father Harold, and I took a trail Julie had showed me that looped around and came back over the top of the falls for a five hour loop, but we were talking, and missed the turnoff.  I was aboard the best mountain horse I ever raised, Mar O Dee, from an outside purebred mare, who had a homing instinct fine enough to focus in on the HORSE TRAILER we traveled in, a skill first discovered on a ride with Julie.

This particular day, Mar started up what I mistook for a trail (evidently an avalanche path, from the debris) and once cresting the rise, my family and I were faced with criss crossed trees strewn randomly.  Glumly Harold pulled out his compass and pointed where we needed to go.  Mar O Dee disagreed, and won the day by simply turning her own direction once I squeezed her into motion.

I told the story about the quicksand Julie headed her horse into on the Bryan's Wall ranch, and how I dallied Julie's lasso around Mar O Dee's saddle horn, towing them back to safety.  Mar then headed up an embankment steeper that I would have believed she could climb, and proceeded to lead us back safely to the trailer with remarkable aplomb.  We waded in the Cheyenne River, which is very acidic tasting.  The only reason I know this is that Julie came prepared — rope, canteen, hat, gloves, boots…  She filled the canteen with that river water, which turned out to be pretty unpalatable for us flat-landers.

Mar O Dee was a green broke three year old on that trip, who a day before had stood stock still while George and Faye and Julie herded a group of cows from Dam Little to a bigger pasture.  As they came back by, she finally decided she'd looked enough, and not only joined the drive, but out-walked the others, leading the group back to the farmhouse she'd never been to before, walking through the machinery strewn yard, past a round pile of fire wood taller than our heads without a glance.  The chatter of warm friends still sounds in my ear as I remember that day.

While I related my long-winded tale to Harold and Steve, Mar led our intrepid group deftly through the downed trees, winding up miles later on a ridge that allowed us to LOOK DOWN on our trailer in the distance.  The steepness of the slope made it impenetrable.  Steve was aboard a green broke three year old purebred Arabian gray mare (small, of course), who he claimed was played out.  He dismounted and led her in switchback fashion down the mountainside, passing, he claimed, an eagle's nest during the descent.

Harold and I went back around a bit, then rode down a perilously steep, but not suicidal, slope.  We also went switchback fashion, with one leg a foot higher than the other.  The next year, when Julie and I drove up, I pointed to the slope Steve had descended.  She was disbelieving until we got back to Steve's, where his minister father, always a straight shooter, verified the tale.  I tried to photograph it, but never captured the grandeur it had in real life.  It didn't look at all scary from the bottom, looking up, but was terrifying viewed from the top down.

Which led to yet another tale about riding with Julie.  We were in the Black Hills, I again on the green broke Mar, Julie on a well-seasoned, but short legged purebred Arabian gelding.  We rode into the tail end of a logging operation, with the dirt road we were on completely obscured by the downed pines.  We started across the area, not realizing the loud buzzing we were hearing were not simply cicadas until a huge tree dropped into the field.  Had we been unlucky, we might have been within reach of its branches.  A frantic worker pointed us to the exit of the road from the far side of the downed pile, which we gratefully headed for.  But our adventures were not over yet.  We hit a fierce hail storm before we got back to our rig in the meadow we were using as base.  Julie was able to run her horse full tilt down to the truck, but I had to be more careful with Mar, who was not as experienced.  Both of us were being pelted by golfball sized hailstones.  Julie already had her horse loaded in the trailer by the time I got across the meadow.  The creek running through the area was just beginning to fill up, so I headed for the sloped cement with a flat bottom, a type of anti-bridge that would offer firm footage.  Mar's shoes slid on the cement, and I feared we'd go down, but just then, the water geysered up out of a crack in the cement, shooting higher than her head.  She reared, turning it into a tremendous leap, landing on the grass at the top of the cement.  Right behind us, the whole ditch filled and overflowed with the run off from the Black Hills.  Mar was quite willing to hop into the four horse, still wearing her saddle.  The hail pounding on the roof didn't bother her a bit when she saw her trail buddy high and dry inside.

We sat inside, examining our bruises, laughing.  When we got back to the ranch, Faye showed us the news, which had marble sized hailstones being graded off the streets of Rapid City earlier that afternoon as though they'd had a winter snow storm, in August.  We showed off our golf ball sized bruises, giving credence to our tale.

Both George and Harold have also passed on now. 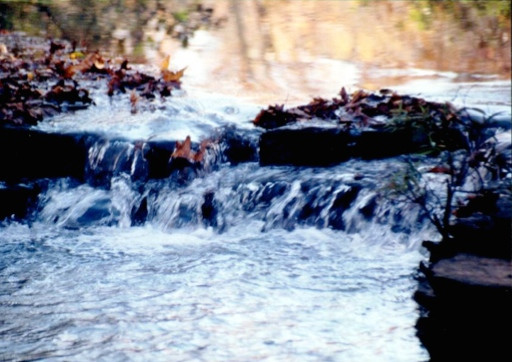 Julie shared a love of photography with me, and when I wrote my first book, The Saga of Travels Far Woman, Book I, Summercircles, she reprinted a few of her shots to help illustrate it.  (The fall scene above graces the section Fall into Winter, and was shot on one of her horse forays into good riding country.  If memory serves, this one was in Arkansas as is Buzzard's Roost.  I honestly don't remember where we were when that waterfall was taken, or even if we were together on that trip, but I use it for the cover of Summercircles.  The label Totem Rock comes from the story; in real life, it is called Buzzard's Roost, but I don't seem to still have an unlabeled shot of it.) 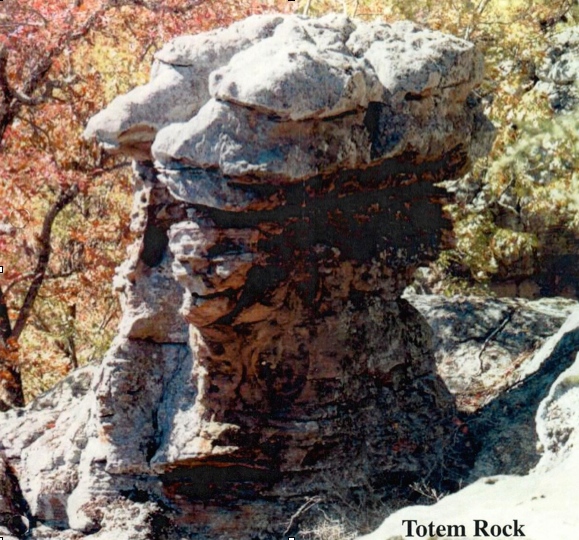